Our second meeting of the now christened “Elegant Bastards Whisky Club” came together lightning quick, on November 27th, 3 weeks after our initial soirée and it proved to be a great night barring a migraine attack for Bruno at the end.

On the roster was AnCnoc 12 & Glendronach 15, with a return on Bruichladdie Laddie classic & Aberlour A’bunadh batch 50. 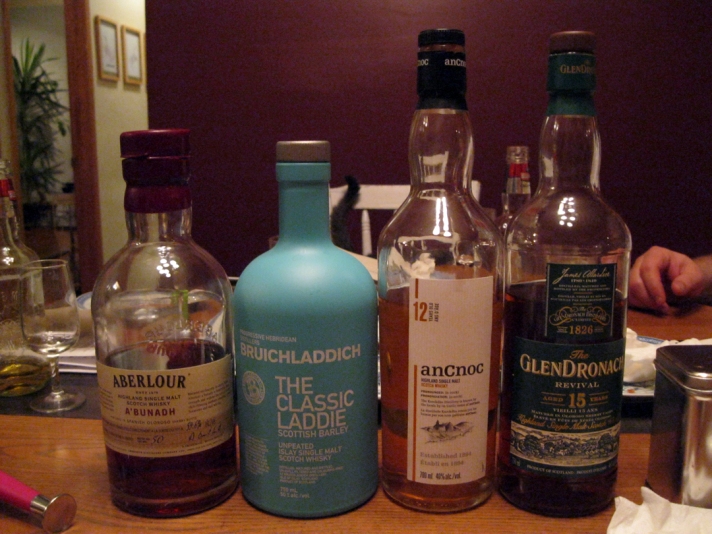 Our gracious hosts for this session Dominique & Eric had the great inspiration to expand on our initial offering of cheese, crackers & charcuterie and throw in crudités and dip  and some hummus. I think this was brilliant in that it helped slow things down and get everyone chatting and creating a more natural rhythm to tasting.

This evening sticks in my mind as being a demonstration of what this whisky journey means most to me. Beyond the sensory journey is the one of camaraderie, sharing and connection. Our group is a motley one, coming from all walks of life and types of characters yet a common ground is found and all walls and separations fall away.

AnCnoc 12 shows great potential in it’s nose, it’s got this nectar, peppery/ginger thing happening but loses steam on the palate.

Glendronach 15 gets everyone fired up, causing Patrik to shout out “Shoryuken” like Ken in Street Fighter II. It has a great Sherry profile yet provides a little something meaty and structured under all that dried fruit profile.

In just one session we come to realize how our taste buds and the whisky can evolve when everyone decides that Classic Laddie doesn’t wow as much as the first time.

Another great night all around. 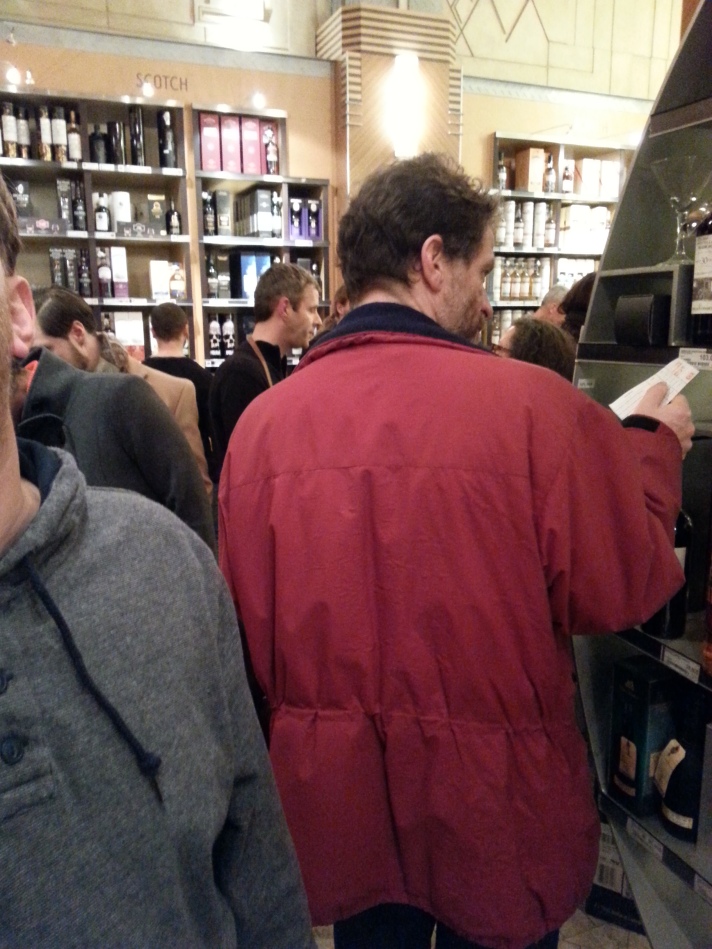 I’ve been meaning to dedicate a post to the in-store tastings at the SAQ Signature (Québec’s liquor board stores). I’ve only attended a few thus far but I firmly believe they provide an essential service, especially for those who are not part of a scotch club or don’t always have the money to fork out for larger tasting events (and to be truthful those aren’t always an ideal setting).

Most sessions do not require a reservation and cost between 10-20$ at which you can sample anywhere between 3 to 5 offerings and these type of sessions exist across all products, so there are tastings for rum, gin, whisky and wine. There is usually a table set with  a tray of fresh copita style glasses, water pitchers and a spittoon, an on the other side the discard glasses. The atmosphere is very much like a 5 à 7 (cocktail hour) relaxed, hang-out style, it’s actually kind of fun to see a bunch of people gathered around drinking scotch around the massive inventory of the Signature SAQ location.

That said it’s not perfect

Let’s end on the positives:

I hope this reaches some people who have been curious about these events and how they go down. I hope to see some folks there.

P.S. To the guy in the red coat in my photo. I’m sorry you moved into the shot last minute and I didn’t want to weird anyone out and take more photo’s if you’re offended let me know I’ll take the photo down.

Before all this, the blog, the meetings, etc., Franck thought of everything: the budget for buying two bottles a month, the little booklets for tasting reviews, assigning a different person as treasurer, responsible for collecting money and receipts from everyone and making sure all was square. He even thought of weighing the bottles after each meeting to prove he wasn’t “tasting” in our backs between meet-ups. Yes, Franck is a thorough fellow.

Franck and I are long time friends from another life (read: job). Since the office where I work moved near where he works, we go for lunch about once a week. When he started talking about hosting a scotch club, I had no hesitation and wanted to participate. Although I was not always an amateur; far from it. For the longest time, I would only ingest hard liquor from mixed drinks. On a couple of occasions, some older – manlier – friends made me try whisky. And inevitably, I would produce a rictus from the first to the last sip. Just the smell of it made the back of my head throb involuntarily. It’s only recently that I started appreciating this fine spirit.

So there we were, strolling after lunch and talking about this Elegant Bastards club. It had to be a small group and we thought six was the magic number. Just enough people to collect the impressions of everyone and not get lost in the frenzy. This experiment made two clans – so to speak – come into one. Franck brought in his brother Sylvain, as well as colleague and friend Bruno. Both of them know a thing or two about scotch. As for myself, I asked my partner Dominique to join the group, and our common friend – and scotch aficionado – Patrik. There we had it, six club members ready to meet once a month for this special exercise.

The very first meeting of Elegant Bastards took place on November 6, 2015 at Franck’s apartment, of course. Upon our arrival, we were offered a beer and something to munch on – very simple, somewhat neutral food – so our taste buds could concentrate on their duty. It was nice to meet new people and everyone seemed to get along from the start. After introducing ourselves briefly, Franck explained the rules of the club, made some jokes (first rule of Fight Club is …), gave each of us our own booklet for reviewing – tasting wheels and all – and presented before us the victims of the night: Bruichladdich’s Classic Ladie and Aberlour’s A’bunadh.

So we went for it. What struck me the most was how long we took just smelling the thing. I swear we must have taken ten – maybe fifteen – minutes before getting our mouth to it. The whole night actually was spent smelling and smelling. Noting in our little booklet. Smelling some more. Exchanging what the odours reminded us. Going from obvious aromas, vanilla, ginger, caramel, etc., to less conventional ones, remover and tires for example.

And nobody took pictures. I don’t remember if at that point, we knew that this “social activity” would turn into a “cultural product”. In any case, it makes this first night that much more of a mythic event, and writing about it from memory alone was a fun exercise.

Was a sentence I uttered to Ali when he introduced me to a friend of his who despite looking like a thug, happened to describe a wine with such eloquence that defied any impressions you might have of the man from his exterior.

The idea of forming a little whisky club was cemented after a few different concepts converged together.

I first learned of an interesting format for a small whisky appreciation club from Jonah at Still Crapulent/after all these years (whose writing is eloquent and funny) I thought the proposal was so simple and perfect to get something started but then had to find the requisite participants.

My brother (bless him) probably heard me wax on about this idea numerous times over a dram this past summer. Initially I had trouble locating willing participants. Things somehow fell into place when Mr. Eric “Toofar” Bolduc had an ace up his sleeve.

Things came together quickly and after our first meeting it was clear we had an interesting band assembled.

The best part is the lack of pretension & open-mindedness of it. Everyone has a varying degree of knowledge or experience but all bring something to the table. I’ve been surprised more than once by someone being able to articulate that elusive smell, taste or feeling that I was chasing after.

The rules are simple : “don’t’ let anyone tell you how to drink your whisky”, “be respectful” and “keep and open mind”. We try great whisky, have a shit-ton of laughs and all get to take turns hosting.

It is my goal to showcase everyone’s reviews and show the different personality of the Elegant bastards’s in question in time.