Alright, so I’m prepping for Spirit of Toronto and a dapper guy in a blazer hands me a box with my name on it and then scribbles a few notes with instructions to follow, I’m like awww shit…cue the Lalo Schifrin score I accept the mission!

Well close enough…the sample is courtesy of @paddockjudge, he did give me instructions on the order in which I should proceed with a trio of samples he provided. These we’re mystery samples I tasted blind #1 was Danfield’s 21 reviewed here the Wiser’s 35 was my second one.

Palate: Honey, a good amount of oak, the rye contributes cloves, orange flower water, a slight peppery bitterness, the vanilla is present but not overbearing, a good richness.

Subtle but full the nose is much bolder than Canadian Club 40 which was a bit of a snooze. I’m not sure if this is only due to the addition of a bit of rye in the blend, or how the bonds of aged corn whisky are handled. From what I gather they tend to consolidate barrels in the Pike Creek warehouse so there isn’t as much effects of evaporation.

This 35 yr old is another whisky I would be curious to taste blind along with some older bourbon to see how it would fare.

After having had a few really good bourbons last year I vowed to try and purchase more of them this year. While I have been eyeing some of the premium selections, enough members on Connosr waxed on about Wild Turkey 101 saying it offered more than one would expect from a bourbon in it’s category. I figured I didn’t have much to lose, worse case it could be used for cocktails.

I poured a dram in both a Canadian style Glencairn and a traditional one to be able to compare.

Nose: Fresh wet oak, caramel corn, a kind of dusty cumin and allspice, pleasant warm grain/corn porridge note.There is a smidge of green apple skin and then lots of cherries building up. There’s a persistent astringency and bite from the alcohol. The Canadian Glencairn, offers more oak/cedar and herbal intensity, a touch of cinnamon red hot candies and a minty feeling. The rye blooms towards the end, with a bit of yeasty brown bread too, it’s a very warming and inviting nose.

Palate: Sweet and dry, creme caramel and rising bread, oak, green plantain, bran muffins, spicy rye and savory feeling on the tip of the tongue, like mountain mint or oregano, a sort of resin-like feeling. Definitely a bit sharp when it first hits your throat but it’s just go this great chewy mouthfeel to it.

Finish: It fades away quickly, leaving a bit of tobacco, sweet vanilla and then turning to dry oak, a bit of barrel char, Turkish delight and caramel corn. 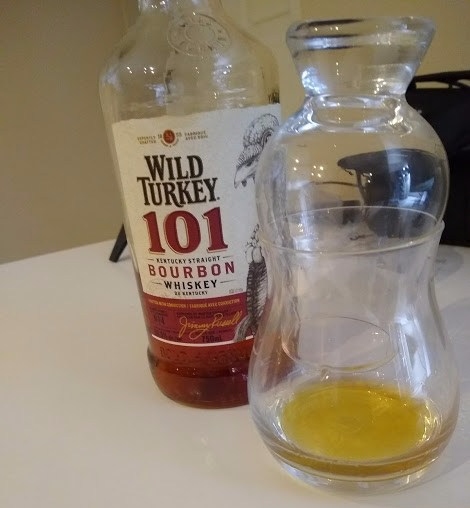 The Canadian Glencairn performed really well here it had a bit more burn but the bourbon felt fuller with more complex, with a bit of a floral touch whereas the nose was darker, closed even a bit dustier when using the traditional glass.One thing to note, there is a drying astringent bite to this bourbon that I generally find pleasant but at times can be off putting.

Overall I really enjoyed this bourbon, it can be easygoing with a large ice cube to sip on a hot day, works well in cocktails due to the abv or can provide enough interest if I want to have it neat and take my time. At 36$ it’s got great value as well.

Canada has a rich history of whisky distilling yet I believe it is in the grips of an existential crisis. This one’s gonna be long but interesting so buckle in or skip past the photo of the bottle for the review.

To understand let’s take a brief look at the industry, like elsewhere in the world, it can be split between the old and new guard. The old guard is composed of several large facilities spread out across the country, these are the survivors of consolidation and account for the majority of the whisky produced in the country.

Then there is the new guard, micro and not so micro-distilleries that have been built mostly within the last 15 years or so. Some of the bigger players are off-shoots of breweries and wineries, others are smaller boutique operations. It is a mixed bag with some deciding to focus solely on single malt whisky, while others are finding success in diversification often selling a lot of gin, bitters, vodka and not only as a means of funding their whisky portfolios.

So what’s the problem, Crown royal is still one of the top selling whiskys in the US, right behind Jack Daniels (don’t tell Trump! or Kentucky), Flavored whisky sales are still giving reps a hard-on and Wayne Gretzky launched a successful whisky brand…why am I being an arsehole?? What’s next? Am I going to shit on the holy institution that is Tim Horton’s?

Well the problem is that most of what is being sold, even some of the new stuff is still the same old boring shit, it just happens to be our shit and so it’s kind of comfy in the diaper if you ignore the smell. I am focusing on what is labelled as “Canadian whisky” not the single malts, that’s for another post altogether. Many stick with the smooth light, caramel, 40%ABV, kind of nondescript and boring…I don’t care if it’s finished in a wine-cask, the base is boring as old balls.

Ask many whisky connoisseurs how they feel about Canadian whisky and many don’t have a good opinion of it, there are many reasons why but they all boil down to the same conclusion. There is just too much, low proof, smooth harmless whisky being released. It’s like they got stuck in the 70’s and didn’t budge. What if people don’t want to drink high proof flavor bombs you ask? Well bourbon is flying off the shelves here, The LCBO made a Facebook event for Old Weller 107 and everyone crapped themselves and cleared the shelves within a week. Lot 40 Cask Strength almost caused a riot (well a Canadian riot so a really polite one) upon release and folks have been clamoring for offerings of the same caliber as we are getting from elsewhere in the whisky world.

Not all is lost, the tide is turning albeit very slowly, the release in 2017 of Corby’s Northern Border Collection was a major step in the right direction. Many would trace the turning point to 2012 as Wiser’s re-release of Lot no. 40 and Pike Creek but I think the true beacon and to me still one of the best examples of what good blending can bring to the category was J.P. Wiser’s Legacy.

Legacy was released sometime in 2010, it was a tribute to it’s namesake and was unique on a few points. At the time there were few “ultra-premium” Canadian whiskys (Wiser’s Red Letter and some Crown Royal Editions) but this differed in that not only did it push a very rye forward recipe but also sported a proper drinking ABV of 45%. It had a good amount of success but in the final years of it’s availability (2016-2017) was largely ignored by folks and was ultimately discontinued. (I think in part because it would have competed with Corby’s other new products) Sadly I believe it was not exported much either, so few outside of Canada had knowledge of it’s existence.

I’ve blabbed enough let’s dive in and see what makes this one so special.

Nose: Caramel corn, mackintosh toffee, golden delicious apple and a little barrel char perhaps? Then a good dose of cloves, allspice, and ginger, the addition of that Wiser’s pot-still rye (AKA Lot No 40) is very apparent here in the middle. There is a bit of a lemon pith bite, you can feel the alcohol on the nose but it’s not harsh , it gives zing and there’s a lingering creamy, buttery bread note too. Really pleasant!

Palate: Sweet oak, brown sugar, a slight mineral tang, lemon zest, pretty silky entrance from the corn which then leaves behind the spicy and fairly drying astringency, it seems like it sticks to the middle of your palate. It has this boldness that many other blends lack.

I like that it’s still clearly a Canadian whisky but you see what a bit of boldness and good blending chops can bring to the game, definitely a yardstick by which to measure other entries in the category.

Don’t get me wrong I am not shitting on other products, I think there is a place for all types of whiskies, I just think too many products are operating in the same spectrum and there is a notable void created by the absence of premium Canadian whisky. It’s not like we don’t have good stocks, look at how much of it leaves the country and is sold under the guises of Whistlepig, Masterson’s, Crown Royal Hand Selected Barrels and so on.