The Irish whisky market is drastically different than that of Scotland, beyond the differences in production style (triple distillation, grains, pure pot, single pot) The situation was born out of consolidation that created a monopoly of just a few large distillers to remain in action.

With all the consolidation the emphasis is on brands rather than on the distilleries themselves, especially considering at one point in the 80’s and early 90’s there we’re only two actual functioning distilleries.

Some of the brands we’re born out of partnerships with wine merchants, who at the time (late 1800’s) had access to better casks in their trade, would sometimes keep bonded warehouses of maturing whisky for both the distillers and for their store trade. I believe Redbreast and Green spot to be the more prominent blends to be created of such a system.

Redbreast was an emblematic choice to represent Irish whisky for our March club meeting. There are few representative of the Single pot-still (formerly pure pot still) style of Irish whisky, it consistently receives praise across most of its expressions. With it’s proportion of Sherry matured whisky I thought it would be a style that would be familiar to our members, a good starting point. I didn’t count on the 12 year old being austere to the point that it would go unnoticed, it didn’t help that it was preceded by the stunning Teeling single malt (review to come).

Redbreast 12 is a vatting of both bourbon and sherry matured spirit, it’s a single pot still whisky meaning it is a blend of malted and unmalted barley, double or triple distilled in those huge Irish style pot stills. 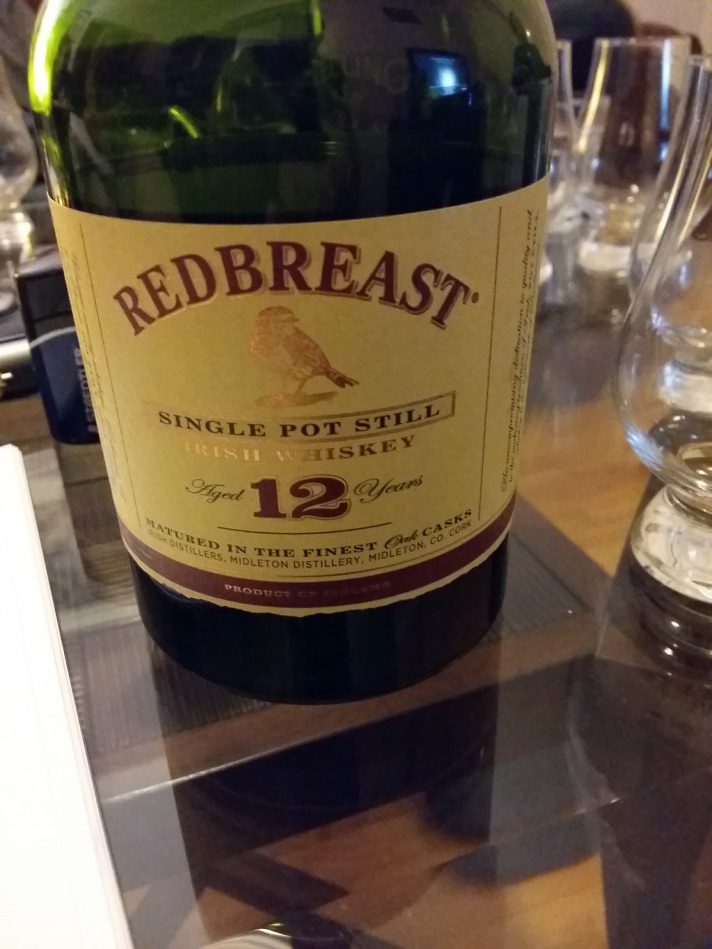 Palate: Despite it being 40% it’s got a nip, almost like a cognac, soaked raisins, honey nut cheerios, ginger, a carpenters shop floor, wood shavings, mineral oil. It then turns dry, a smidgen herbal, dried lemon zest, a bit of toffee with nutmeg and cloves.

Finish: astringent, green peppercorns and oak shavings a bit of the plum pudding and almonds but it’s gone so quickly and that’s perhaps where the low ABV hurts it.

There are elements of this whisky I love, the interplay of the robust grain and plasticine notes with that of the sherried oak. Airing out the bottle helped bring some definition to the palate but ultimately I’m still unsure how I feel about this whisky. It’s certainly well crafted and while I’m curious about the cask strength version, I’m not certain the higher proof would fix my qualms with it. Perhaps that short finish?